The Science of Light & Electricity for Kids

The Science of Light & Electricity for Kids 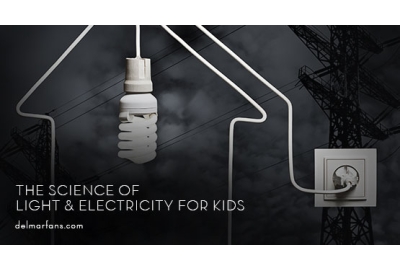 Electricity is a very important part of our lives that we use for just about everything we do. From turning on your dining room chandelier when you sit down with family for dinner, to playing on the computer, or using the toaster, electricity is involved. You might already know that electricity is very important, but did you ever really think about what electricity is, or where it comes from? We will explore the answers to these questions and more.

Electricity is a form of energy, and starts with the smallest particles that exist, called atoms. Atoms make up everything in the world, and atoms themselves are made up of things called protons, neutrons, and electrons. Protons and neutrons are located in the center of an atom, and the electrons move quickly around them. This movement is actually what creates the energy needed for electricity.

Are There Different Types of Energy?

How Does Electricity Get to Your Home?

If you take a look outside, you will probably see poles with wires hanging from them. This is how you get the electricity needed for your home and other places. The wires and poles help to transmit and distribute electricity so that it can be used. The first step is to create the electricity, which is done in a power plant using generators. Generators can use different things to create electricity including wind, water, coal, and natural gas.

The smaller lines lower the voltage, or power of the electricity so that it is safe to use when it reaches our homes. Electricity will enter your home, school, or other building through a panel. You might hear your parents talk about breakers, or fuses. These things often have to do with the panel that provides electricity. Once it has entered the panel, it can then travel through all of the different wires in your home to make things like your ceiling fan in your bedroom to work.

Now that we know all about how electricity works, lets talk about who discovered it. Way back in 1752, there was a man named Benjamin Franklin. He was a curious scientist and inventor who did an experiment to prove that lightning was electrical. During a thunderstorm, Franklin went outside and flew a kite with a metal key tied to the bottom. This caused him to receive an electrical shock, and discover electricity.

While it sounds pretty cool, it is important to know that what Benjamin Franklin did was very dangerous. You should never attempt to fly a kite during a storm. After Franklin's kite experiment, other scientists continued to experiment with electricity and went on to create more types of light bulbs, here is a good read on the history of light bulbs, and more. Even today, there are scientists looking into different ways to improve electricity.

Learn more about electricity by visiting these pages:

How Does Electricity work in Your Home?