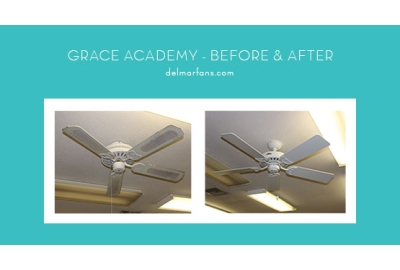 September 18th is National Ceiling Fan Day (NCFD), a day dedicated to reducing energy consumption by turning off your central cooling system and turning on your ceiling, desk or floor fan instead. Initiated by the Fanimation Fan Company, the campaign aims to save billions of kilowatt hours of energy. This year’s theme also encourages you to swap your old fan for a new, energy-efficient ceiling fan.

In support of NCFD, we at Del Mar Fans & Lighting wanted to raise awareness of the event while also giving back to our local community. We paired up with Grace Academy, a small private school in Ormond Beach, FL, in dire need of new ceiling fans. The school’s existing fans were dusty, rundown and in some case, unsafe to operate. We donated and installed four, brand new Hunter ceiling fans.

Out with Old Fans, In With the New Fans

The ceiling fans, some of which were 40 years old, were in such bad condition they were literally falling apart. One rogue fan blade went airborne while Chalo, our installation expert, uninstalled the fan. While another ceiling fan plummeted to the ground before being full disassembled.

The new ceiling fans feature a simple, five-blade design with pull chain control. While the average central air system consumes 5,000 watts of energy, these fans consume 66 watts of energy - that's a savings of 98 percent in energy consumption. They also move about 5,186 cubic feet of air per minute. The students at Grace Academy should be comfortable and ready to learn.

3 Ways You Can Participate in NCFD

Here are three easy and affordable ways you can participate in National Ceiling Fan Day.

National Ceiling Fan Day is about reducing our energy consumption without sacrificing comfort.

How will you celebrate NCFD?