The Advantage of DC Motors Explained

The Advantage of DC Motors Explained 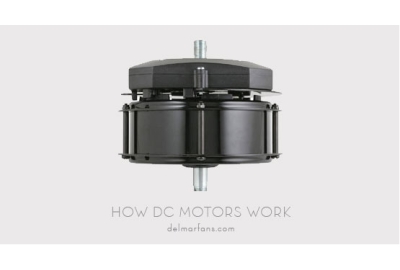 What do the abbreviations AC and DC meant to you? As Floridians, here at Del Mar Fans & Lighting, the term AC reminds us of a summer staple used to keep us cool; and DC is the abbreviation for our nation's capital. Rarely do these terms conjure images of the best ceiling fan motors. However, our journey to understand the difference between an alternating current (AC) motor and a direct current (DC) motor has been an enlightening one.

Which motor is going to be best choice for your ceiling fan? Brands like Craftmade, Emerson, and Fanimation use DC motors in many of their popular ceiling fan models such as the Craftmade DC Union. But still, we asked, what are the differences between these two motor types?

All motors work by converting electrical energy into mechanical energy, but the similarities end there for AC and DC motors. AC motors are powered by connecting directly to a power source. DC motors are powered through the use of a battery or a converter. The speed of the motors is also controlled differently.

For an AC motor, the speed is controlled by varying the frequency, while the speed of a DC motor is controlled through the current. A DC motor is by far the preferred motor in many applications today, from electric trains to cranes to elevators, and are definitely the choice for ceiling fans.

As the demand for energy-efficient products increases, so does the use of DC motors in ceiling fans and other household appliances. Here are some of the reasons DC motors trump AC motors:

Because DC motors are more technologically advanced, you can expect to pay more money for a DC ceiling fan. Although they cost a bit more upfront, ceiling fan manufacturers like Craftmade believe that the advantages of versatility and the speed of a fan with a DC motor, such as the Craftmade DC fans, are well worth the costs.

With its great speed and functionality, why not choose a fan with a DC motor?

September 17, 2013
0 view(s)
Stay Connected
Join over 31,000 subscribers who save money with Del Mar Fans & Lighting.
We respect your privacy