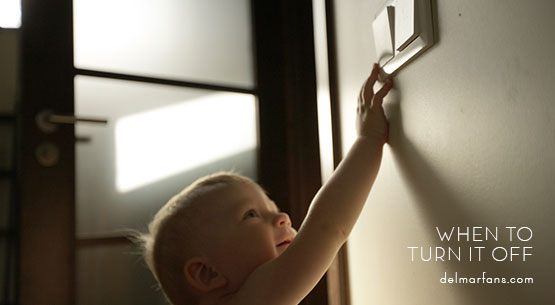 In most houses, lights get turned on and off quite frequently, especially if you have children. A lot of parents deal with the bedtime light war when their children are constantly turning the lights on after the parent turned them off. But according to the latest research on cost effective lighting, you might be better off giving up on the light switch war and just leaving the lights on, especially since many lights are rated according to the number of times they are turned on and off.

When to Turn Off Incandescent, Halogen, and Fluorescent Light Bulbs

Recent Energy Star findings suggest, flipping a switch off is not always the best route to cost effective lighting. In fact, to find the most cost effective solution, you need to take into account the type of light bulb used, as well as the cost of electricity.

For example, incandescent lights, which are the least energy efficient, need to be turned off whenever they are not in use, particularly in the summertime, since a lit incandescent bulb also adds heat to a room. You can also add Lutron dimmers to control the voltage output that the light bulb is getting, this will reduce energy consumption quite a bit.

Halogens, though more energy efficient than incandescent bulbs, are still not the most efficient options, and should also be turned off whenever you leave the room. Try to always turn off fluorescent lights. The cost of energy savings by having them off for five seconds is greater than the energy consumed by turning them off.

When to Turn Off CFL and LED Light Bulbs

Once you start talking about CFLs and LEDs, the topic of cost effective lighting becomes a little more complicated. Since CFLs are so energy efficient, the rules for their usage varies. In general, if you plan to be out of the room for less than 15 minutes, leave the light on. If you’ll be gone longer, turn the light off.  As a rule, the life of a CFL is greatly affected by the number of times it is turned on and off, so if you want to prolong the life of your CFL bulb, you are more likely to do so by switching it on and off less as opposed to just using it less. Many people believe that CFLs use a lot of energy to get going and that this is a reason to avoid switching them on and off, but bulbs with an Energy Star rating are required to endure frequent switching.

The video below gives you different scenarios using an incandescent light bulbs vs. using a CFL light bulb. The cost savings vs. the cost of purchasing the light bulb vary depending on where and how you are planning on using the bulb.

The life span of an LED bulb is not affected at all by switching it on and off, which makes LEDs ideal for use with sensors such as occupancy sensors or daylight sensors that require on/off operation. LED light bulbs also have the advantage of switching on to full brightness immediately. Because of this, it is always best to turn off your LED bulbs when you are not in the room.

Generally, the more cost-effective lighting you have, the less money you will save by turning it off when you are not in the room. Each bulb is printed with the number of watts. Once you find out how much your utility charges for electricity per KwH, including during peak periods, you can easily calculate how much you are paying for lighting. As a rule, turning your lights off, with the exception of LED lights, is almost always a quick route to cost-effective lighting. Sensors, dimmers and other automatic lighting controls can also help with this. Lighting controls could help end the lighting war, forever.