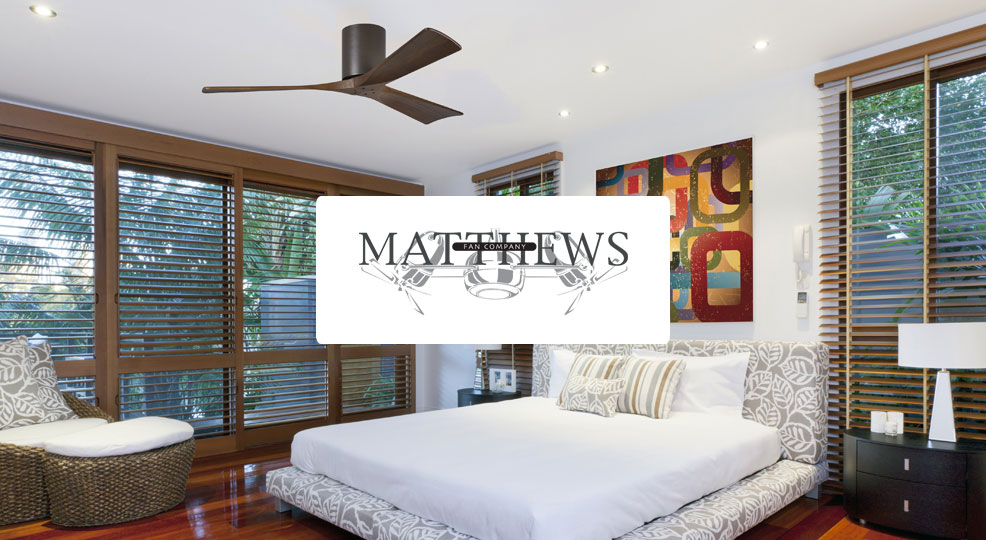 In 2017, Matthews Fan Company celebrated its 25th anniversary. Shortly after their celebration, the CEO of Matthews Fan Company, Chuck Matthews, sat down for an interview with Del Mar’s very own Digital Marketing Lead, Alexa Mateman. Mr. Matthews reflected on the past 25 years and when asked where the future of their product line was heading, he hinted that the future of Matthews’ fans would adhere to the phrase “less is more.”

From Matthews, we have always seen clean, simple and contemporary fans which bring about the essence of simplicity. Matthews’ fans bring brilliant craftsmanship and engineering. When you buy Matthews’ ceiling fans, you can be assured that you are getting a ceiling fan that will endure time and carry forth with lasting elegance. In this brand spotlight, you will learn about some of Matthews top-selling products and about the beginning of the Matthews brand.

In 1986, Chuck Matthews was given a trip to Brazil as a gift from his parents. It was a life-changing trip, as it was there in Sao Paulo that he noticed a unique ceiling fan hanging from the ceiling of a restaurant. As if by fate, the owner of the manufacturing facility that had made the eye-catching fan was an acquaintance of his friend whom he was visiting. After being given a tour of the facility, Mr. Matthews began importing fans and selling them to friends and family, before eventually selling them to retailers.

The Matthews Fan Company was formed when he started creating his own ceiling fan designs. Not only does Matthews’ hold a true passion for the industry, but they are a company which has grown from the ground up and they recognize the individuality behind each order. Here are just a few of the things you can expect when buying Matthews ceiling fans:

The Matthews Eliza is the Matthews Product Spotlight, and rightfully so. Let me just begin by first of all saying that “Eliza” is a beautiful name and is therefore very fitting for this lighted ceiling fan. The Eliza was designed in 2013 by a Chicago architect who seamlessly blended beautiful modern form with superior function and movement. The blades were designed to maximize air movement at the outer edge of the blade to result in more efficient air velocity rings and greater motor optimization. The Eliza comes available in two different finishes and five different blade colors. This remarkable fixture also comes with a six-speed fan remote, dimmable lights, and reversable direction fan blades. 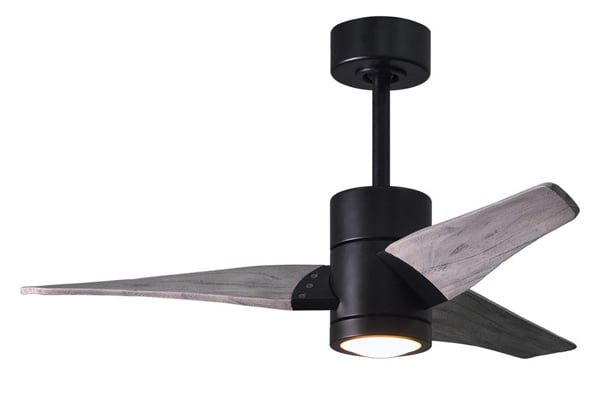 Perhaps due to the fresh look that Matthews fans have been bringing for years, Matthews updates their product line less frequently than other manufacturers. However, we want to highlight a product which was released in the past couple of years that is growing in popularity and brings a modern vibe with glowing downlighting.

The Matthews Super Janet brings an array of options with three different blade spans, two blade colors, and four finishes to shop from. Not only is this fan versatile but boasts an exquisite design with the solid construction of cast aluminum and heavy stamped steel. The Super Janet is becoming a very popular choice. Along with its eco-conscious LED lighting, this would be a wonderful addition for a rustic farmhouse style room or a contemporary classic. 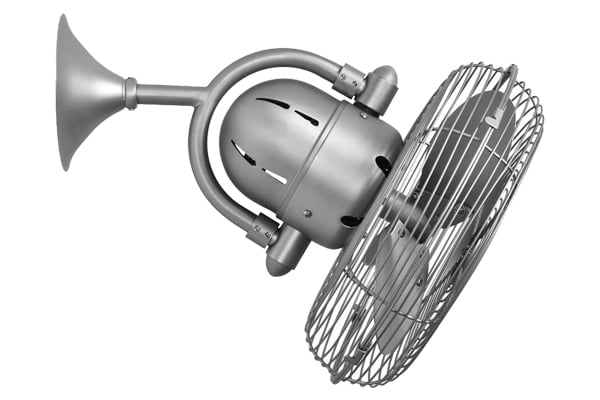 The Matthews Kaye is a gorgeous oscillating wall-mounted fan which is sure to cool the room down with great style. While the Kaye is a smaller fan, it’s airflow still produces a strong and cool breeze. This fixture brings modern and contemporary style, a three-speed wall control, and an ETL damp rating. Not only would this be perfect for the patio, but it would make for a lovely bathroom or kitchen fan as well. 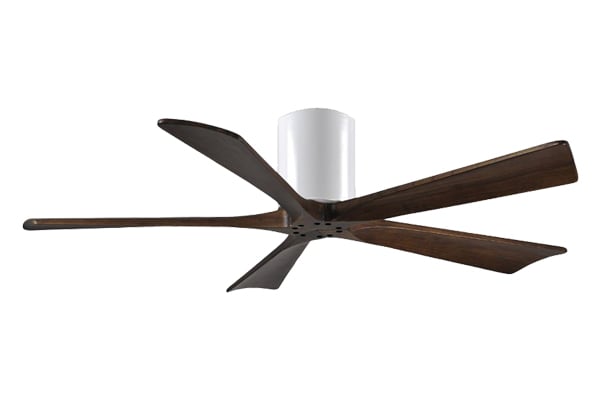 The varied options that come with the Matthews Irene are simply crazy! This gorgeous hugger-style paddle fan is available in six different finishes, three different blade spans, and two different blade colors. Additionally, the entire Irene Collection offers seven different variations of this model to incorporate lighting and other accessories. With a White finish and walnut tone blades, as shown above, this Irene is bringing a glossy and modern feel. 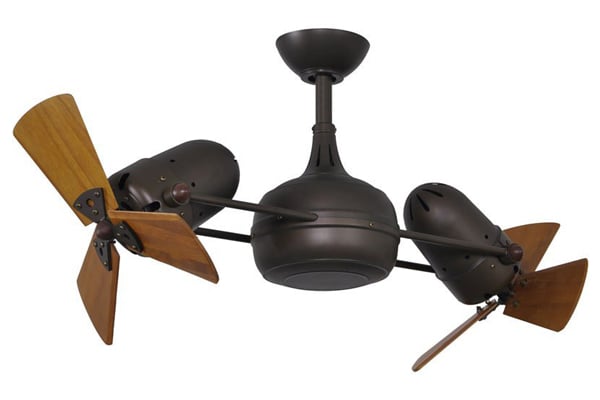 The Matthews Dagny is a dual rotational ceiling fan which offers a unique design and a great airflow. The Dagny is UL and ULC damp rated and was designed with cast aluminum and heavy stamped steel. With a Textured Bronze finished and six solid mahogany wood blades, this ceiling fan showcases a design that is slightly reminiscent of twin outboards on the back of a sports fishing boat. The exposed assembly and adjustable fan heads are also very industrial in their composition. Lastly, let’s be honest, the dual ceiling fan design is just plain cool! 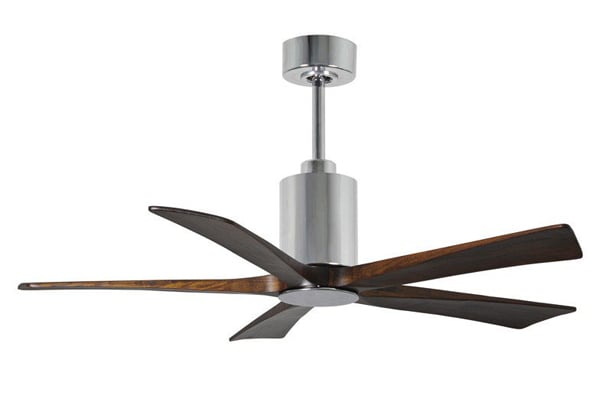 With an ETL listing for damp locations, the Matthews Patricia is a wonderful addition to any home or business. It’s seamless assembly along with its sleek aesthetic create a contemporary machine of grace. It moves efficiently and at the low volume of a whisper with its DC motor. The Patricia comes with reverse and light dimming function on the wall control and six-speed remote. 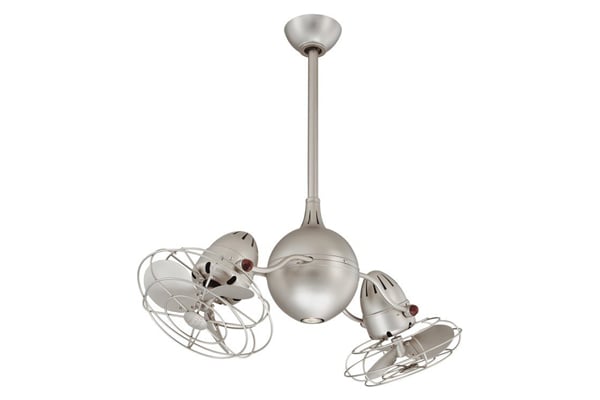 With its sleek and modern design, the Matthews Acqua dual rotational ceiling fan is a great choice for any room. Not only is its spherical motor housing with lighting very unique, but it offers a cool and direct breeze which can be moved by adjusting the fan heads. The Acqua is available in both a Brushed Nickel finish and a Bronze finish.

Shop All Matthews Fans with Lights! 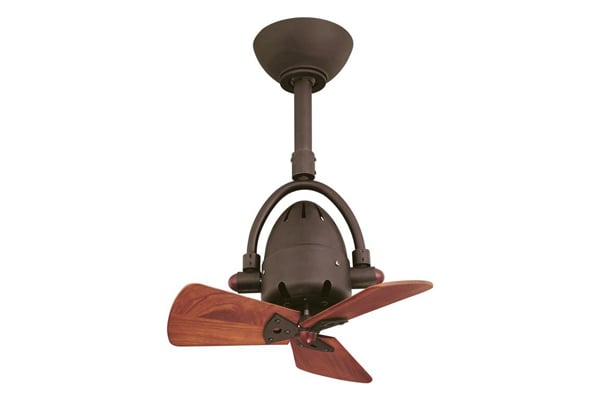 The Matthews Diane is a single oscillating direction ceiling fan which offers a fresh appeal. If you liked the Dagny, chances are, you will like the Diane as it is essentially the single version of the Dagny. If you like the individual look of the Diane, but need increased air circulation, you could always install several Dianes throughout your home to bring flow and synchrony from one room to the next.

Shop All Matthews Fans without Lights!

When searching for the best Matthews fan for your needs, remember that you are shopping from a brand that is passionate about their designs and brings top quality. Matthews keeps it clean, classic, and ageless. Upon finding the best “Matthews match” for your home and style, keep in mind that all orders $40+ ship for free!

If you would like more assistance tracking down the perfect product, you can always reach our ceiling fan experts at 1-800-724-5501, or you can click to chat!

What is your favorite Matthews ceiling fan? Let us know in the comments below!